Ireland – My Home & The Place where I grew Up

I come from a place that I feel is connected with India in so many ways. It’s a place in Ireland called Tara and just like my adoptive country, it too is a very mystical place.

Barely an hour away from Dublin, it is far removed from the Irish capital’s metropolitan ambience, vivacity and fame. I grew up in Candle Hill, Skryne in the community of Tara, County Meath. It is typical of a quiet Irish village – sparse population, lots of greenery and hundreds of sheep. But there’s a difference.

We are blessed to be one of Ireland’s best archaeological treasures, and a stay here – short or long – will have anyone full of love for history and its riveting tales. Skryne is famous for the early 6th century monastic ruins of St Colmcille, a man from a princely family around whom many tales and legends are told.

However, the place is also known for one of the country’s quaintest pubs: Mrs O’s. It’s a classic country pub set against a historic backdrop, named after owner Mary O’Connell, who died a great grandmother only a few years ago. The pub was made famous by stout brand Guinness in a Christmas advertisement and can take one back to the old days simply by setting foot within.

Tara was once the seat of the ancient high kings of Ireland and is closely associated with the country’s patron St Patrick who was summoned there after he lit the Easter paschal candle on the hill of Slane close by. The sites of Tara and Slane – which is home to a monastery and Slane Castle – attract thousands of visitors from the world over each year. The castle is now a venue for many music concerts.

Nearby is a site of deep mysticism and history. In Newgrange, a Neolithic monument older than Stonehenge in Britain and the pyramids of Egypt has been rebuilt and is one of Ireland’s great national monuments. Experts are still unsure what it was used for, but it is thought to have had religious significance as the rising sun lights up the interior chamber on the winter solstice. Tourists aren’t allowed inside any longer, but a visitors’ centre has a recreation of the central burial chamber.

The main towns in County Meath are Navan, Kells and Trim, with the latter having the most historical significance. officially knows as King John’s Castle – built in the 12th century. Spread across 30,000 square metres, it was used extensively for the locations for the film Brave Heart.

Close by are smaller towns of interest, including Ashbourne and Ratoath, with lots of other small villages around.

Each of these towns is a picturesque tourist destination with significant historical places that traverse the centuries. There are quaint hotels and craft shops in all, and even coffee shops to keep away the chill. To help the increasing number of tourists, Trim and Kells have visitors’ centres, and Navan has started walking tours so they can be educated and entertained by local guides.

And true to hearsay, there are lots and lots of pubs. Unlike the British, the Irish generally name their pubs after the owner or street they are located on. They are minimalist and as a tradition did not serve food, but have now changed their ways.

It’s a warm and friendly atmosphere in every pub – or ‘local’ as the Irish would call it. Most owners know their customers by first name and very often, their orders too! If a game of Gaelic (Irish) Football is on, the whole place is filled with noise and laughter, cheering and swearing as need be. You’ll be lucky to find traditional Irish musicians with their flutes and fiddles, but many pubs host live music sessions on the weekend – just like in Goa.

You will nearly always find Guinness being served, as you would renowned Irish whiskeys, but smaller towns will serve their own brews. With Guinness and whiskeys like Jameson being very popular and available around the world, it’s worthwhile to taste what is locally made. Pubs now also serve traditional food, including Irish stew (made with lamb, potatoes, carrots, onions and parsley), boxty (a type of potato pancake) and soda bread. As you can see, potatoes are a big part of Irish cuisine.

Growing up in a large family, I was the seventh of eight children, the eldest being 20 years older to me. Living in the deep country on a farm attending local schools was all part of my childhood. My dreams of travelling seem so far in the distance but with my mother’s encouragement and a map of the world on the wall, as soon as I could, I set off on my travels with a free spirit. India was one of my destinations which I first visited 10 years ago, that is when I hung up my travelling shoes and settled here in Goa.

And so we say cheers to life, or Slainte as the Irish would say! 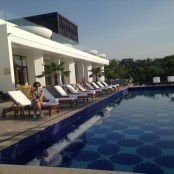 Written by: Sinead McManus
Detox at Devaaya
Hollywood at Home

India's Favourite Music Festival has come back home to Goa and we at LR Beach Lounge will be hosting the official Pre Party on the shores of Morjim Beach. Join us with some of your favourite SUNBURN FestivalDJ's... https://t.co/7vFI0MKJvf

I was in London during the summer which I love so much with long evening picnics, drinks in gardens and hanging out by the pub till sundown at 10pm. With not much time on hand, my schedule was full but one... https://t.co/9g1uaLJzn1

Free to Your Inbox